AFFECTS is a space research project funded under the European Commission's 7th Framework Programme (Grant Agreement N° 263506).
This wiki has been installed as a communication and work tool for project partners only.
All publicly available information concerning the project and its progress can be viewed on the project website www.affects-fp7.eu.

Solar storms are a consequence of sudden eruptions of magnetised gas in the Sun’s outer atmosphere. Commonly such storms start with a sudden release of electromagnetic radiation lasting for some minutes (a solar flare) and by an eruption of a giant cloud of magnetised plasma – a coronal mass ejection (CME), accompanied with beams of very energetic particles emitted into space. The fastest of these “space hurricanes” are accelerated to speeds of ten million kilometres per hour and, if heading in the direction of Earth, reach our home planet, at a distance of 150 million km, in less than a day.

Solar storms affect the Earth environment from the magnetosphere down to the ionosphere, and even to the lower atmosphere climate system. The natural hazards of severe space weather have the potential to catastrophically disrupt the operations of technological systems, such as communication systems and power grids on Earth. The next period of strongest solar activity in the eleven-year solar cycle of the sun – a so called solar activity maximum – will occur after 2012, raising the risks of extreme space weather events. Through the AFFECTS (Advanced Forecast For Ensuring Communications Through Space) project funded by the European Union’s 7th Framework Programme, European and US scientists develop an advanced prototype space weather warning system to safeguard the operation of telecommunication and navigation systems on Earth to the threat of solar storms.

The AFFECTS project is led by the University of Göttingen’s Institute for Astrophysics and comprises world-wide leading research and academic institutions and industrial enterprises from Germany, Belgium, Ukraine, Norway and the United States. The Planetarium Hamburg is the project’s educational and public outreach center.

Input for the next Project Newsletter

The D2.4 report has been revised corresponding to the review remarks. Adequate information on the data retreival, storage and access has been added and the description of the geomagnetic indices data base has been improved. Also the issue of establishing the SWACI-AFFECTS website as part of the work for this deliverable is now better described. Additionally, updates of the SWACI-AFFECTS website are in progress in order to get a better impression of the data bases and source institutes and the use of the data within AFFECTS.

On April 1, ROB welcomed new colleague Andy Devos, who is developing statistical quality control routines for the solar and geomagnetic predictions of the Regional Warning Center Brussels at ROB (part of deliverable D3.4). He has worked out an in-depth analysis of F10.7 radio flux forecasts, and will next turn his attention to K index and flaring probability predictions. This study will benefit both AFFECTS and COMESEP, and is funded by both of these FP7 projects.

Another new ROB colleague, Emil Kraaikamp, has started working on June 1st on the development of a dimming and EIT wave detector on SDO/AIA data. Based on near real time input of quicklook AIA images, the algorithm will detect and characterize dimmings and EIT waves. This will provide more and earlier information on Earthbound CMEs, helping to improve ROB's ursigram and presto products. This effort is another example of synergy between AFFECTS and COMESEP.

Based on the previous AFFECTS study of the proper construction of Proba2/Lyra proxies for the GOES X ray flux, a tool was developed at ROB in which the GOES curve and these proxies are interactively linked to an automatic flare list, while the flare position is automatically indicated on corresponding SWAP images. This work was performed in collaboration with ESA's Space Situational Awareness program. The tool is accessible at http://p2web.oma.be/ssa.

At UGOE, research on the parametrization of CMEs is ongoing. Several CMEs were modeled via a multipoint analysis of CME parameters (speed, width, direction of propagation, size, mass, acceleration, deflection, stream interaction). This work is expected to allow proper CME characterization for input in the ENLIL model which calculates density and speed of the CME as well as its arrival time at Earth.

Current activities in WP4 are centered around the preparation of the deliverable reports due on project month 18. No outstanding issues have been identified.

The progress so far is as follows:

The ACE module, designed for providing ACE solar wind and IMF data to the FSI processing modules is in progress. The connection to the E-SWDS of NOAA is established. Now the output of the ACE module has to be adjusted to the needs of the FSI forecast modules. The integration of the Early Warning GNSS, the geomagnetic activity forecast and the TEC perturbation forecast processing modules are in preparation. Their integration will start in autumn.

First preparations have been made for the International User Workshop, and a date for the workshop will soon be decided, taking into account suggestions from ESA's Space Situational Awareness program.

An example of our work is shown on the picture. 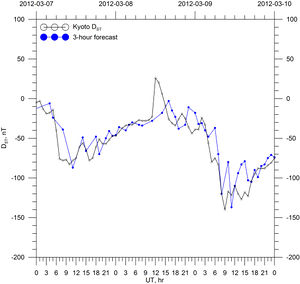 The research leading to these results has received funding from the European Commission's Seventh Framework Programme (FP7/2007-2013) under the grant agreement n° 263506.